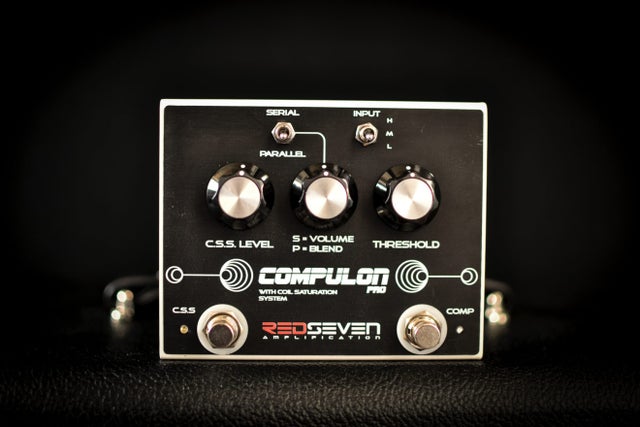 Following many requests of putting back in production the original Compulon pedal, we thought it was the right time to do, and with an improved version of it.

COMPULON PRO still an optical based compressor, sharing the basic circuit of the original design, but this time with a “two stages” mode compression for a better tracking of your dynamics.

We find optical designs in this appliccation still the best way to approach the concept of dynamic for guitar players in demand of control. From very subtle to fast“160x” type compressions, Compulon Pro offer a wide pallete of possibility.

It’s not over! We love tone and analog circuits, so like a proper studio mastering grade compressor, which one of the most peculiar characteristic still in the output stage, we chose to add C.S.S. (Coil Saturation System) in this design, which is a very particular circuit, act to mimic a real output transformer. By driving hard the knob, it will return in some nice and fat harmonic content, down to zero, for a nice touch of buffering and “something extra” to your tone.

Combining Compulon Pro with the new C.S.S. (Coil Saturation System) circuit, result of the next classic “always on” pedal on your clean to channel.

Compulon Pro is the most advanced and best sounding compressor pedal platform for both guitar and bass available right now.